An empty 37,000 square foot space at 3403 Brighton Boulevard is about to get the royal treatment. It is transformed into Regency England for The Queen’s Ball: A Bridgerton Experiencean immersive installation by Shonda Rhimes, Netflix and Feverup that will allow fans of the Netflix show to enter the universe of Lady Whistledown, Eloise, Francesca, Benedict and Colin Bridgerton, where they can dress up in costumes era, listen to a string quartet, sip Bridgerton-themed cocktails and enjoy great photo opportunities.

The space is brought back to life from the early 1800s by Non Plus Ultra, a San Francisco-based company that expanded to Denver last year. Non Plus Ultra partners with property developers to activate vacant properties until they are ready for full development. It finds events like A Bridgerton Experience and brings them to the spaces, while renting facilities for corporate events and parties.

The Bridgerton Experience has been to Atlanta, San Francisco, Montreal, Washington, DC, Chicago and Los Angeles; Non Plus Ultra booked it for Denver. “This show, in particular, is a step above anything we’ve done,” says Jordan Langer, Founder of Non Plus Ultra. “There’s such incredible integration of artists and actors, and also the ability to tie it into a real TV show, it’s like you’re there. You’re at the Queen’s balls. It’s really this transport to a different world.”

Non Plus Ultra got its start in San Francisco in 2014, when Langer owned a few physical businesses. He hosted a Halloween party at a large space earmarked for development, and after the party was a success, he asked the developer if they could continue hosting events there. When the developer agreed, Langer formed Non Plus Ultra and began partnering with other properties to host more events. In the beginning, Non Plus Ultra created these events, proposing the concepts and creating the experiences; today it delivers already established concepts. “Now we are focusing on real estate, permits and production,” says Langer. “The hardest part is finding the location, getting the permit, and making sure you have the correct permits in place.”

The Brighton location, which was once the Great Divide Brewery’s Barrel Bar Taproom, was “the unicorn of Denver”, says Langer. “Everyone has walked past The Great Divide Brewery hundreds of times. Now people are going to start thinking of it as an event space. It just made sense to tackle this one. to this project for a number of years.”

But the Brighton is just the latest location Non Plus Ultra has found in Denver. The first was the 35,000 square foot Sports Castle, at 1000 Broadway; it had been empty since Sports Authority closed its store years ago. That building was enough to persuade Langer to expand to Denver last year. “The owners group is still figuring out which direction they want to go,” Langer said of the building. “If we weren’t there, they would have to make those decisions a lot quicker.”

Earlier this year, Non Plus Ultra filled the Sports Castle with Banksy’s art, an exhibition with more than eighty pieces by street artist Banksy; it will host Denver Fashion Week there in November. Non Plus Ultra has also partnered with Denver Rock Drill, a 1910-built warehouse group in Globeville; in addition to the Sports Castle and the Brighton, he now works with the former Denver Post printing press at 4400 Fox Street; the Broadway, a 12,000 square foot space in the Golden Triangle; and Suite 320 at the Pavilions at 16th Street Mall, formerly Jazz @ Jacks. 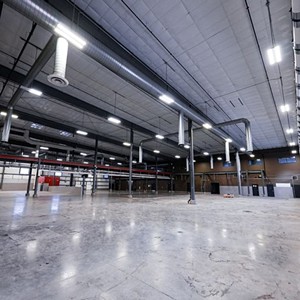 Property developers with space often contact Non Plus Ultra with their properties, Langer says. He visits them and if he has a vision for a space, he can decide to partner with the developer. Enabling spaces “helps the city as a whole by not locking them in while they’re sitting there,” Langer said.

Langer calls what Non Plus Ultra does “adaptive reuse. We use them in such a way that they’re not necessarily intended or built to be used as,” Langer explains. “Taking an old warehouse that may not have electricity or running water and putting 4,000 people there takes a lot of effort; that’s really what makes us different and unique.” The Denver Post print plant was in a particularly bad state when Non Plus Ultra took over, with no water or electricity; it was turned into the backdrop for the Museum of Contemporary Art’s annual fundraising gala. “History has literally been printed in this building in Denver for decades,” he says.

Non Plus Ultra will likely stage another big experiential show in Brighton after Bridgerton, since the space is perfect for such an immersive event. “The reason I do all of this is because it makes people happy,” Langer said. “Looking at the faces of the people on this show, in particular, and how happy and excited they are to be a part of this cultural experience.”

The Queen’s Ball: A Bridgerton Experience opens at The Brighton, 3403 Brighton Boulevard, on October 30 and will run until December 18. Tickets range from $39 to $134 per person; buy yours here.